Diving in Bali is world famous for its diverse underwater marine life and then there’s something that few dive spots in the world have, a wreck that is packed with history. Tulamben USAT Liberty shipwreck is one of the most popular scuba diving location in Bali.

Diving in Tulamben at the USAT Liberty shipwreck is simply amazing and for many reason. The wreck itself provides an unbelievable image of a world war wreck with the opportunity to penetrate through the wreck’s cargo hall. The wreck penetration is easy and beginner friendly as the entrance is done from the side with an open ceiling which eliminates the claustrophobic feeling some divers may fear.

The Tulamben USAT Liberty shipwreck is currently split in half which depending on the tide allows divers to find the wreck relatively shallow that even snorkelers and freedivers can comfortably enjoy it.

Being submersed for such a long time, the Liberty wreck now is home to diverse marine life: Turtles, Stone Fish, Devil Scorpion Fish, and for the early morning and night dives people can enjoy seeing the Humphead Parrotfish.

If you are interested in booking diving the USAT Liberty Shipwreck, visit our Tulamben page.

Where is the USAT Liberty wreck?

The Liberty wreck is located on Bali’s East coast in the town called Tulamben. The locals have managed to organise proper logistics around the wreck including car parking, and tourist shops. Of course, most of the resorts and accommodation options are all concentrated in the area of where the wreck is located.

Tulamben is located 2 and a half hour car trip away from Sanur, where most of Bali’s dive centers are found. From Kuta or Seminyak, you can easily add an additional 30-45 minutes to the trip if you are planning to visit Tulamben. But although the trip is long it is undeniably beautiful as divers travel through the Bali island and passing by the famous active Agung Volcano.

Location and Direction of the Liberty Wreck

The USAT Liberty Wreck is located just off the shore of Tulamben accessible from the volcanic black sand and rocky beach found there. It’s a gentle slope reaching the wreck just 20-30 meters swim away which makes it easily accessible for both advanced and beginner divers as well as for snorkelers and freedivers.

What you will see diving the Liberty Wreck

The wreck itself is stunning to see as it’s packed with history. Marine life is making home here that attracts divers interested in wide angle and macro photography.

Around the wreck you will find a lot of camouflage fish such Stone, Scorpion or Frog Fish, both fully grown as well as juvenile. Shawn the Sheep, Butterfly Nudibranch, Ghost Pipefish and a lot more can be found here.

Night dives are special but by far the attraction is the sunrise dive for spotting the schooling of Humphead Parrotfish. The Humphead is sleeping at the wreck during the night and at sunrise they begin moving just before divers start their dives, a behaviour learned through the many years the wreck is there.

1 . The History Behind the USAT Liberty

The USAT Liberty was an American cargo ship torpedoed by a Japanese submarine in January 1942, ultimately beached on the Bali island. In 1963 a strong volcanic eruption from the nearby Agung Volcano moved the ship off the beach which now makes the Liberty wreck a popular dive site.

Learn more about the history of the USAT Liberty

2. Where to find the USAT Liberty Wreck in Bali?

The Liberty wreck in Bali can be found on the East Coast in Tulamben. A small fishermen’s village which is now famous because of the Liberty wreck. Divers visit here from all around the world to get a chance at spotting the wreck and the marine life that it attracted over time.

The USAT Liberty is sitting just 30 meters away from the Tulamben beach. As over time it has split in pieces, the highest point is depending on the tide at approximately 5-10 meters depth with the deepest point at approximately 30 meters deep. The USAT Liberty Shipwreck has attracted major marine diversity but also helped build fascinating coral formations for which underwater photographers visit here.

Scuba diving the USAT Liberty Shipwreck is beginner friendly and even Discover Scuba Diving or children can dive here. The water temperatures are high all year round at approximately 28 degrees Celsius ( 82 F ), currents are generally low to none and visibility rarely drop below 20 meters ( 65 feet ).

4. When is The Best Time To Dive the USAT Liberty

The beauty about Bali is that the diving season never ends. Diving conditions at the Tulamben USAT Liberty are proper all year round although generally the peak of the rainy season in January and February makes people visit less compared to March to December.

The rainy season does not affect the water conditions although at some points visibility may be slightly lower as swells and winds can pick up as well.

5. Who Can Dive the Tulamben USAT Liberty?

Everyone can dive at the Tulamben USAT Liberty shipwreck. The generally easy underwater conditions makes this dive site ideal for beginners, introductory dives, advanced divers and even snorkeling.

Is Bali Tulamben Shipwreck a good for scuba diving? 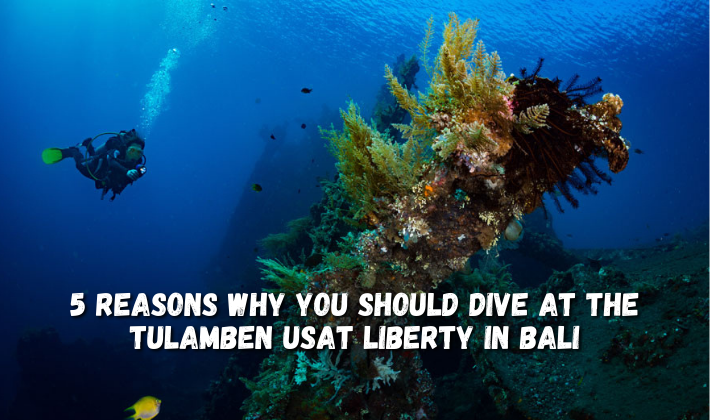 Tulamben, Bali is considered to be a popular destination for scuba diving because of its clear waters and diverse marine life. The Liberty shipwreck, which is located just off the shore in Tulamben, is a popular diving spot that offers the opportunity to explore a historic shipwreck while also observing a wide variety of marine life, including schools of tropical fish, eels, and even large pelagic species. The surrounding waters also offer the opportunity to explore shallow coral reefs and walls, making it a diverse diving destination suitable for divers of all levels.

How deep is the USAT Liberty wreck? 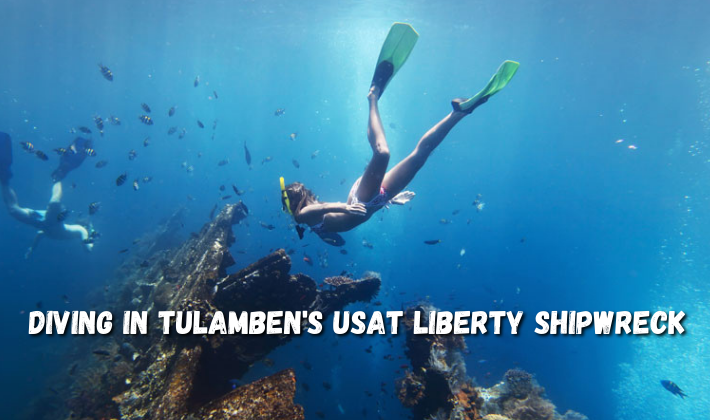 Avoiding Bali’s rainy season, the best time is March to December. Water conditions in Tulamben are generally stable for an extensive period of time and rarely presenting strong currents or bad visibility.